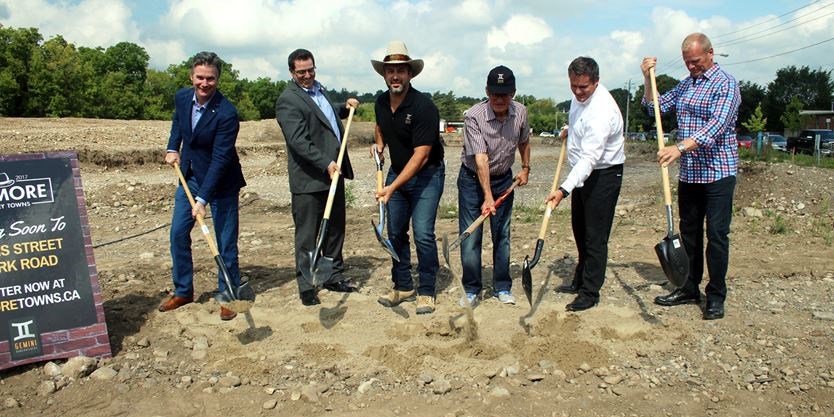 A site that was home to a hat factory for decades is now one step closer to becoming a slate of townhouses.

Approved by council in 2016, the sod has now been turned for Biltmore Factory Towns, across the road from Lyon Park. Soon, what was once a burgeoning factory on Morris Street will be home to 20 on-street townhouse units.

Assuming construction goes to schedule, the Gemini Homes project is expected to have its first closing by this spring.

The project was several years in the making, with the application to build on the property first received in April 2011 — several months before it was announced that the production of Biltmore Hats, having recently been purchased by Dorfman Pacific Hats, would be moved to Texas. Production remains there to this day.

When the proposal to turn the hat factory land into residential units was first brought forward in 2011, there was opposition in the neighbourhood. The original proposal, which would see 64 townhouses, was deemed too much for such a location.

At the time, Maria Pezzano, the president of the Ward Residents’ Association, said that the proposal was in stark opposition to the historical ground the proposal sat on, calling it “one of the first places of industry and a place a lot of immigrants came to work at.”

Pezzano added at the time that she would like to see parts of the factory’s structure maintained and incorporated into development at the site.

While the original structure did not make as part of the final development — it was torn down several years ago — the new buildings are designed to reflect the hustle and bustle of the old Biltmore factory.

Making its way to Guelph in 1919, Biltmore employed around 350 people at its peak in the 1950s. However, business declined and the company would later go bankrupt. However, by 2005, the company was bought by Eric Lynes, who brought the company back to life before selling it in 2010.

While the California-based Dorfman Pacific Hats originally planned to keep Biltmore production in Guelph, it was announced in 2011 the production would be moved to Texas.