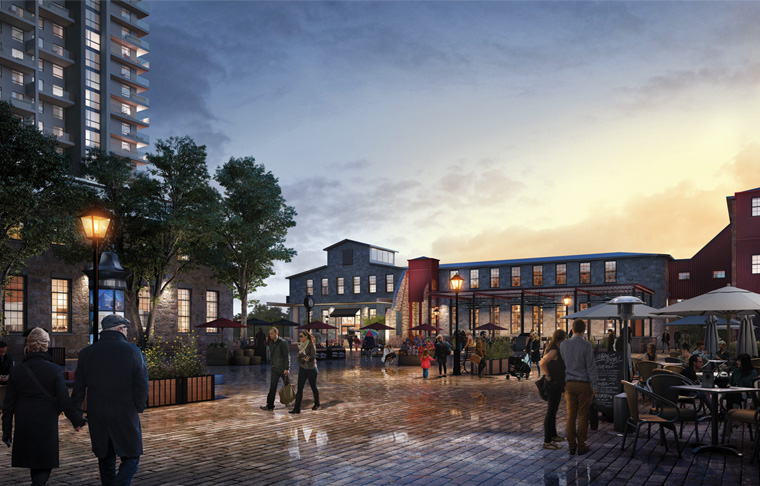 The deal by HIP Developments to buy the Southworks Outlet Mall is done and the work now begins on one of the largest redevelopment projects in Cambridge in recent years.

“The deal closed June 30 and all of the existing tenants have moved out and the mall is now closed,” said HIP Development’s president Scott Higgins, Tuesday (July 4).

Some of the Southworks’ tenants have found new homes in the Galt core area according to Higgins.

“Which is really good for everyone. I know Southworks Antiques has found space at 73 Water St. in Cambridge Place,” he said.

Others that have found new homes in the Galt core include The Patch and E-Bolt Music.

Now that the former outlet mall is vacant, work crews have started moving into the historic industrial complex to begin its transformation into the new Gaslight District.

Work has already begun on the former Tiger Brand building at the corner of Grand Avenue and Cedar Street, which will house Grand Innovations, a next generation accelerator centre for fledgling businesses. It will also accommodate a new Conestoga College applied research and technology hub.

Next door to the former Tiger Brand building, fencing has gone up on Fraser Street where a new senior’s apartment building is about to be built by Triamico Development Affiliates.

“Construction will get going on that block this year and work will start on Southworks next year,” Higgins said.

As the last of the Southworks tenants moves out, Higgins said he has a number of new tenants ready to move in once construction is completed in 2020. Energy+, Cambridge’s electric utility company has already announced its intention to move in. It will be joined by what Higgins describes as an “urban market’ and seven restaurants.

HIP Developments is currently finalizing a letter of intent with Finest Sausage and Meats, the owner and operator of Kitchener’s Victoria Street Market. The agreement would see the company open a second market location in the Gaslight District.

Joel Doherty, HIP’s director of development tells the Times his company has met with several local market operators and has been in discussions with Victoria Street Market owner Bo Gedja for several months about becoming an anchor tenant at the Gaslight District. Details are still being finalized, but the agreement would see a 7,000-square-foot Gaslight Market operate out of the existing Southworks building, at the corner of Grand Avenue and Fraser Street. The market would offer a butcher shop, deli, bakery and fresh fish and seafood from Caudle’s Catch Seafood.

“We are very excited about the opportunity to open our second market at the Gaslight District,” said Gedja in the email. “This is going to be such a dynamic destination in Waterloo Region. We feel there is already a great customer base and pent-up demand in not just West Galt, but all of Cambridge. Combine that with over 600 new residents on the same site and 400 new jobs in the Gaslight District and there is tremendous potential for our market.”

Higgins said plans are also afoot to create a major event space with seating for up to 1,000 people, which can be used for weddings, concerts and major art installations. That space would have double the seating available at the neighbouring Dunfield Theatre.

In the build-up for the development, a new sales centre will open in the former Southworks Tootsie’s location this September.

Higgins said he is also planning a special event Sept. 16, “to give the community and people of Cambridge a taste of what the Gaslight District is going to be.”

“It will be a day in the district, an open party for the community,” he said.

The city has already granted the event an exemption from its noise bylaw. In the application for the exemption it notes that event will run both outdoors and indoors between 11 a.m. and 9 p.m. and then continue indoors until 1 a.m. The event will feature live music inside and outside on several stages, food trucks and a ferris wheel. There will be three stages – an outdoor main stage featuring live music, an internal stage featuring local artists and a second indoor stage for cooking demonstrations. More than 1,000 people are anticipated to attend.