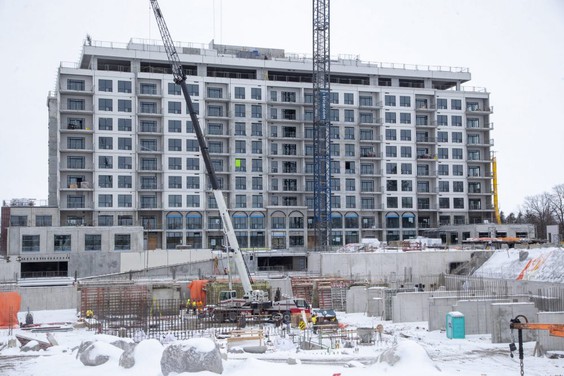 London’s apartment vacancy rate jumped to its highest level in eight years in 2020, as new units hit the market and demand decreased amid the COVID-19 pandemic, new numbers show.

Figures released Thursday by Canada Mortgage and Housing Corp. (CMHC) show the city’s vacancy rate — the percentage of units available for rent — hit 3.4 per cent last year, up from 1.8 per cent in 2019, a 20-year low.

It’s a significant jump for a city that has grappled with historically low rates for several years, but not large enough to see rents drop much given the high demand for units before the virus crisis began.

CMHC pegged London’s average 2020 rent for all rented units at $1,119, a year-over-year increase of seven per cent.

“The . . . 3.4 per cent (vacancy rate), it’s not historically high for London, but I would say going from 1.8 per cent to 3.4 is a pretty significant jump for one year,” said Andrew Scott, a CMHC senior analyst.

“That vacancy rate is not typically associated, looking back historically, with a large drop in rents. You would need to be somewhere above 4.5 or maybe five per cent to see the rent come down.”

A drop in immigration — both from new permanent residents and international students — due to the pandemic contributed to the vacancy rate increase, the highest it has been since 2012, as construction of rental apartments in London has been strong.

In fact, 2020 was the fifth straight year in which the value of new construction in the city topped $1 billion, due in large part to construction of large highrise developments and new family homes.

In total, the city saw a net gain of 746 new apartments while the total number of occupied units was virtually unchanged at 44,750.

“In the past, we had seen the (total number of occupied units) grow in line with new supply or above the growth in supply, but this year, due to lower international migration, we didn’t see that number change that much,” Scott said.

Though asking rents rose during most of 2020, the London market showed its first signs of softening last month, according to rent-tracking website Rentals.ca. Here are some key figures from its December report:

The pandemic, however, remains the main factor that will determine demand and future rent prices.

Scott said vaccines could push demand for units in London back up once life gets back to something like pre-pandemic normal. That’s why he anticipates rents will continue to rise, albeit more slowly than in recent years.

“It takes (rents) longer to adjust to these higher vacancy rates,” he said.

LONDON RENTS, BY THE NUMBERS: