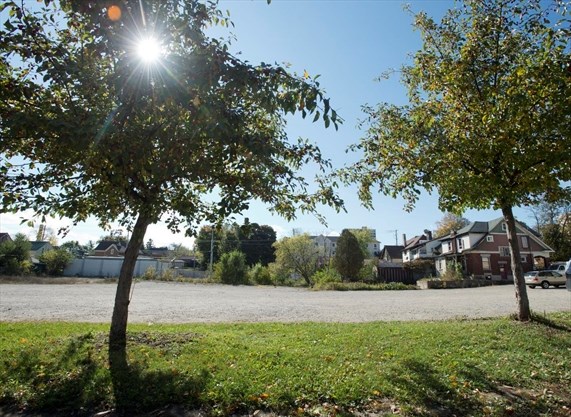 A downtown grocery store has been on the wish list of downtown residents for years.

A proposed development that would bring a grocery store to downtown Kitchener came a step closer to reality Tuesday.

The city’s committee of adjustment approved a number of minor variances Tuesday for the project at 387 King St. E., between Cedar Street and Madison Avenue.

The $19-million project would build an eight-storey building with 60 one- and two-bedroom apartments and street-level retail, and a two-storey building with a grocery store topped by offices. Most of the site is vacant, but three houses would need to be demolished. Construction is expected to start next May and wrap up in December 2020, though the developer hopes to open the grocery store before the residential tower is finished.

The project is being developed by Ken Chau, who owns B & T Food Market, just down the street at 470 King St. E.

A downtown grocery store has been on the wish list of downtown residents for years. The downtown has a drugstore and a beer store, and a liquor store is set to open soon, but the nearest full-service grocery store,Central Fresh, is in midtown. J & P Grocery opened in spring 2017 on Goudies Lane, but is only 4,000 sq. ft. Another Asian grocery, New City Supermarket, is also nearby at 236 King E.

The committee approved several variances Tuesday, including one to reduce the number of parking spots. The development will have 105 parking spots rather than the 152 required, and six of the spots will be smaller ones for compact cars.

City planners recommended approval because the development is close to transit and the LRT, and because some spots can be used by shoppers during the day and residents at night. As well, the development includes several incentives for alternative travel: 84 bike parking spots, a bike repair station and two carpool parking spots.

Planners said the development “will create a significant entry feature at the gateway to the downtown area.”