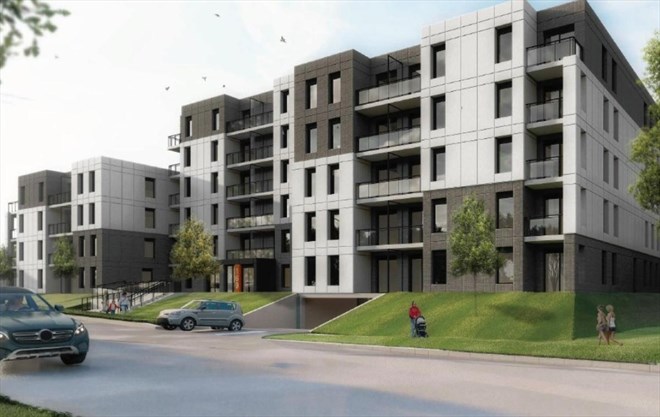 The challenge of increasing density in a fast-growing community, while protecting the interests of existing residents was front and centre at this week’s Kitchener council meeting.

Council was considering a proposal by local developer Vive to build a six-storey, 166-unit rental apartment on Borden Avenue near the Aud. The project is across the street from Sheppard public school, within walking distance of the Borden LRT stop.

The proposal came to council in January, but in the face of vigorous objections from nearby residents, councillors held off making a decision then, asking developers and city planners to see if they could better address resident concerns about height, traffic and the building not fitting in with the neighbourhood.

The project would redevelop two lots at 155-169 Borden, one of which now has a single-family house and the other that has been vacant since 2013. The tallest section of the new building would be at the centre of the site, furthest from nearby homes, with a four-storey wing next to a single-family home, and a five-storey wing beside a 3 1/2-storey apartment.

Residents made it clear they aren’t happy with the proposal, which is higher than other apartment buildings in the area and is next to single-family houses.

They worry the 166 units will brings hundreds more cars to the neighbourhood, with a driveway almost directly opposite the school. Coun. Sarah Marsh, in whose ward the development will go, said she had been “inundated” with emails from residents.

Candee Tremblay said the proposal was “a soulless, monolithic building … completely out of whack” with the neighbourhood.

“This is my home, and my neighbours’ homes,” she told councillors. “I believe that you would feel the same as I do if you were living here.”

The developer has tried to address resident concerns, said Pierre Chauvin, the planner representing Vive: it scaled back its original plan for a seven-storey building, added parking, and will plant trees and put up a fence to screen the development from single-family homes on Weber whose backyards abut the project.

The project will add to the badly needed supply of rental housing, said Heather Campbell of Vive. Rents would average start at $1,300 a month and average $1,500, which would make them affordable for the average household in the region earning $63,000 a year, she said.

Tremblay rejected that argument. “Preferential treatment should not be given to a development simply because they are proposing rental housing,” she said.

Council voted 8-3 to approve the project, with several councillors saying it made sense to intensify close to the LRT. “I get it’s a balancing act, but if a project such as this, near Weber Street, near the LRT, near shopping that’s available at Eastwood Square, if that’s not the right location I’m not sure what is the right location,” said Mayor Berry Vrbanovic.

As the city intensifies, council will need to figure out how to strike that balance, said Coun. Debbie Chapman. “As more and more buildings are being put into established neighbourhoods, I think we have to be more and more cognizant of what residents are saying, and their concerns, whether it be for traffic or density or height or setbacks.”