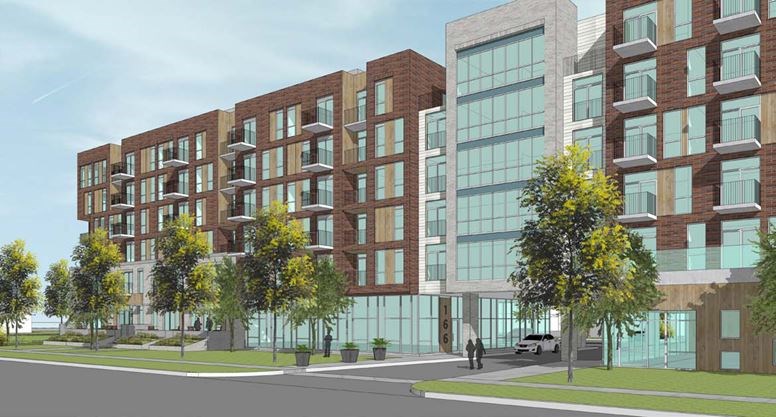 Some councillors said that while residential intensification is required for a growing city, a proposal to build a new apartment building on College Avenue may be a step too far.

On Tuesday, council got its first look at a proposal from Pinemount Developments to build a six-storey, 116-unit apartment building on the south side of College Avenue West, between Scottsdale Drive and Edinburgh Road South.

Under the city’s official plan, the land is slated for low- and medium-density residential. This new application is looking to change that to high-density.

“I agree that there needs to be intensification, but this seems like a significant jump from where it currently is.”

Coun. Mark MacKinnon agreed, pointing to the list of zoning amendments Pinemount is also looking to get approved, including fewer parking spaces and fewer landscaped areas than would normally be required under city bylaws.

“There’s not an appetite on council any more to accept these major variations,” he said, before pointing to the city’s official plan and its ideals for the properties’ futures.

“What I’m seeing here are changes that are just unacceptable. And I’d encourage the developer to take a strong look at that and come back with a medium-density plan.”

The potential for a high-density project also drew concerns from the surrounding neighbourhood.

Jurgen Rodrigues, who lives across the road from where this new building would be built if it is approved, said the increase in vehicular traffic, along with the project’s proximity to several schools, would lead to problems.

“Many of these students walk to school, and the rush-hour traffic that this development will generate occurs at exactly the same time that students are making their way to the to their schools,” he said.

“This is a huge safety issue, which cannot be ignored.”

He added that hundreds of new residents moving in across the road could lead to issues to his own home as well.

“My house is on a concrete slab — it has no basement. So when the sewers overflow from the immense strain put on them by over 200 residents across the street, they will flow right into my living room,” Rodrigues said.

“I have no faith in the development planners, who say that this is unlikely to happen. It seems like an inevitability as we live just downhill from this proposed development.”

‘This is not going to happen overnight’

Should this project get the go ahead from council — Tuesday’s meeting was only to receive the application — two buildings would be torn down to make room for it — a home at 178 College and College Place, a retirement residence at 166 College.

The latter is currently being operated by the Nova Scotia-based Precision Health Group, alongside Wellington County.

Oren Turkienicz, Pinemount’s director, told the Mercury Tribune in October the developer will not be leaving any seniors without a place to live.

“We’ve been working closely with the retirement residence and the county, and we are working with them in order to facilitate that very cleanly,” he said at the time.

“People will be housed, and we are working with them very closely.”

At Tuesday’s meeting, Hugh Handy with the GSP Group, speaking on behalf of the developer, said the lease for the property is in place until October 2021.

“This is not going to happen overnight, in terms of the demolition of this facility or relocation,” he said.

“So it’s important to know that it’s not imminent, but it is within the near future.”

James Drage, with Precision, added the company is looking to renovate another facility within Wellington County and move College Place’s residents there.

Following a question from Coun. Phil Allt, Handy said Pinemount is looking to make the building’s units as rentals. However, he added, Pinemount is not looking to include affordable or social units as part of the project.

Allt would later be the sole councillor to vote against receiving the application, with the 12 other members of council voting in favour.

From here, the application goes back to city staff, who will come back to council chambers in the future with a report recommending either approving or denying the application. There is no timetable for when this report will come to city hall.