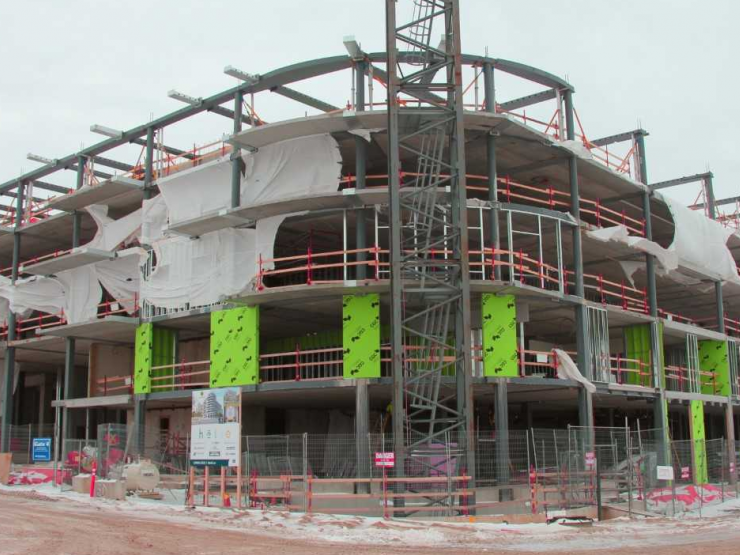 An injection of federal green energy money will make a highrise in the heart of the province’s first net-zero community — one that produces as much energy of it consumes — at least 25 per cent more energy efficient, the president of the developer says.

London’s Sifton Properties is receiving $3.9 million from the Liberal government, as part of Canada’s Energy Innovation Program, to support the construction of Helio, a $57-million, mixed-use highrise at its West 5 development in northwest London.

The funding, announced Tuesday, will help the company make the 10-storey, 115-unit building 77 per cent more energy efficient than a standard building — up from the 50 per cent estimate when construction began last May.

“We had initially planned to put in a certain volume of solar panels, but this will allow us to put in more, and it’ll also allow us to upgrade some of the mechanical equipment . . . that will allow us to get that much closer to net zero,” said Richard Sifton, president of Sifton Properties.

Now under construction, Helio is being built in the middle of the residential-commercial, medium-density development along Oxford Street West.

Once completed, West 5 will have about 2,000 residential units, including townhouses and lowrise and highrise units, along with ground-floor and stand-alone commercial units.

The heart of the community will be a central square for events such as movies, concerts or yoga classes.

“As a community as a whole, we will be producing as much energy as all of the building will use,” Sifton said.

Kate Young, Liberal MP for London West and who announced the funding, praised Sifton for taking the lead and creating this project, which she said could become a template to be followed across the county.

“This really is the future,” she said about West 5. “A future where we combine better energy efficiency, more renewable energy and sustainable technologies to create good jobs, a stronger economy, and healthier and thriving communities.

“Projects like this one also have the potential to make Canada a leader in a $1-trillion global market for clean technologies,” she said.

A total of 87 townhouse units are already occupied in the development, which is being built in phases and has a 10-year timeline for completion.

Helio is expected to be ready for occupancy in 2020.

The building, with a roof and parking canopy filled with solar panels, will include all the amenities people have come to expect with a larger focus on energy efficiency, Sifton said.

“We are not developing new technologies, but we are putting them all together and making them work more efficiently, so that allows us to bring to market something that is completely unique, different and environmentally friendly,” he said.

Sifton also said the company is designing the next structures for West 5, which would likely be a 100-unit retirement apartment complex.

Construction for this project is expected to begin in about four months, he said.