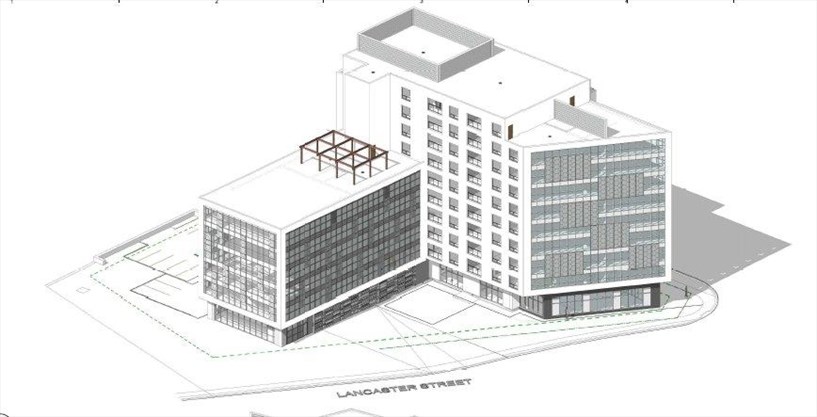 A developer is proposing razing a former Tim Hortons restaurant at the corner of Frederick and Lancaster streets to make way for a 10-storey mixed-use condo development.

The 1.12-acre site is made up of four separate parcels of land, now occupied by a heritage house on Frederick used as offices for Rome Transportation, the now-closed coffee shop, a single-family home and a duplex along Lancaster.

Under the proposal, the heritage house would be saved, the other buildings would be demolished and a building with 134 units and six commercial spaces at street level would be erected, said city planner Garett Stevenson.

The building is a somewhat unusual design to accommodate the odd-shaped lot, with a 10-storey section along Frederick that ends in a “flatiron” wedge at the corner, and a six-storey wing closest to homes on Lancaster. The design includes an outdoor patio and plaza along Lancaster.

The plan would bolster the protection for the heritage home at 181 Frederick St. with a heritage designation. It’s now simply listed on the city’s heritage register.

The developer, a numbered company, hopes to start construction in mid-2020, with occupancy by the end of 2021, said the developer’s planner, Dave Galbraith of IBI Group.

The zoning allows the development, but the developer is asking for several minor variances at the Nov. 19 committee of adjustment.

The proponent wants a floor space ratio of 2.72 times the size of the lot, when the current maximum is 2.33. The proposal would create 160 parking spots — 144 underground and 16 surface spots. That’s less than the 200 required under current rules, but roughly what’s required under a planned new zoning bylaw. Twenty-five spots would be for business use, 11 of which would also be used for condo visitor parking. Access to the site, and to the underground parking, would be from Frederick Street, Stevenson said.

“Most of the Central Frederick neighbourhood is lowrise conservation,” he said, with two main areas proposed for denser growth: this site and another at Scott and Weber where an 11-storey highrise is proposed.

Anyone who wants more information or to comment on the proposal can contact city planner Garett Stevenson at garett.stevenson@kitchener.ca