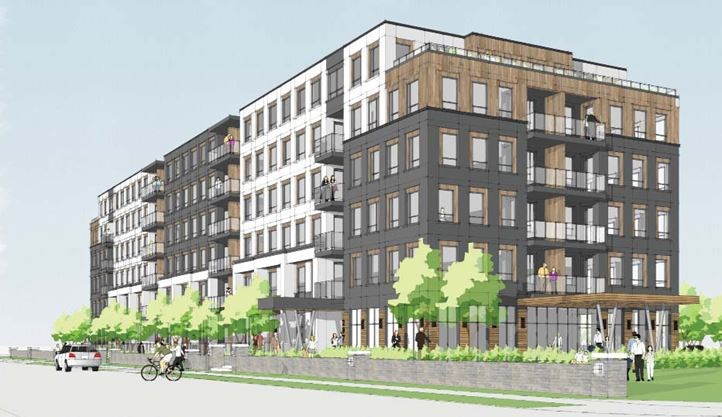 A proposal to build a six-storey condo in the south end of the city will be returning to council chambers for a decision in November.

“I’m trying to be as mayoral as possible here, wink wink nudge nudge, you probably should sharpen the pencils a bit more,” Mayor Cam Guthrie said after council’s initial vote on the project, which resulted in a 6-6 tie.

That tied vote was on the proposal for a six-storey, 86-unit condo building. The pitch from Reid’s made its first appearance in front of council in March 2018. At the time, the developer was looking to build a six-storey, 102-unit building, replacing five homes that would be demolished to make way for it.

By the end of 2018, the proposal was down to 89 units. Another three units were taken off soon after, reaching its current 86-unit configuration by April.

In a report made public earlier this month, city staff stated they recommended the project get the green light.

As has been the case since the project first appeared before council last year, a number of residents in the surrounding area say the six-storey building is too tall for the neighbourhood.

Peter Wechselmann, who has lived in the area for more than 20 years, said that the zoning in the area when he first moved there was for single-family homes — something he saw as a promise for the future.

“The city says if you move here, the community around you will be very similar down the road,” he said.

“That promise, with this building, will be broken.”

Peter Kastner, who lives across the road from the proposed development and has organized local opposition to the project, said that while Reid’s proposal has shrunken in terms of units, it has stayed the same where it counts: height.

“It came back with a new prospective and new covers on it and really fancy photographs on it, and we’d open it up and look at it,” he said of the project’s revisions.

“Somebody would say there’s more lipstick and there’s lots of perfume, but it’s still a pig.”

Coun. Bob Bell, one of the six councillors to vote against the project, said that while improvements had been made since last year, there was still much to be desired.

“I think that the building is still too long. There’s not enough articulation in the building,” he said, referring to the ends of the building standing at four storeys.

“I won’t be supporting the proposal because I just don’t think it’s enough. They’re close, but they still don’t have me onside.”

Wednesday night’s vote is the second time as of late that council landed on a tied vote for a development application.

In September 2018, council landed on a tied vote for a proposal from Granite Homes to build 23 townhouses on Beechwood Avenue. Granite’s proposal was altered, bringing the application down to 22 units. Council voted in January to approve the project.

The Beechwood project has since been appealed to the Local Planning Appeal Tribunal.