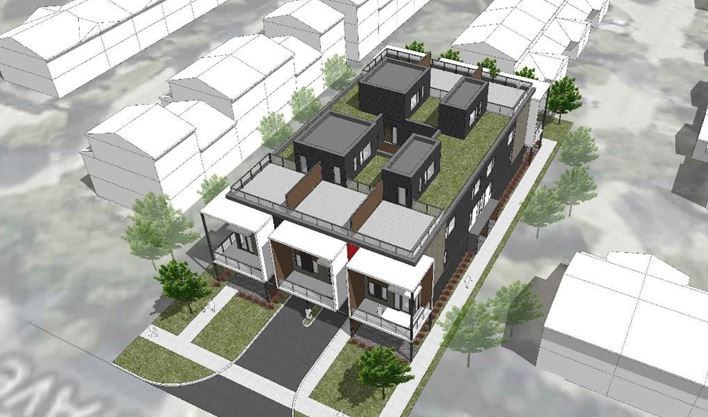 In a report for the Dec. 10 council planning meeting, staff are recommending the approval of a plan to construct six back-to-back stacked townhouse units at 278 College Ave. W. Across the street from Centennial high school, there is currently a house and garage on the property.

The proposal was the subject of a public meeting at city hall in April. Since then, the size of the project has shrunk, going to three storeys from the original four, along with some minor changes to its design. These changes, the staff report says, “was in response to public, agency and department comments received as well as comments provided by council at the statutory public meeting.”

Size was an issue at the April public meeting, with some nearby residents writing in to say the original proposal was too big for the size of the property and the neighbourhood.

“The lot is too small to have 6 residential units,” wrote Darlene Scott in her letter to councillors.

“The height of the building (four storeys) will negatively impact a substantial number of residents by blocking natural light to their units.”

“I have no issue with the land being used for property, it’s currently got a house on it that is in a poor state and replacing it is a great idea, even a multi occupancy unit is fine with me too,” wrote Greg Horne is his letter.

“My objection is really the size of the proposal and that this will have a negative impact on my property that I was not expecting when I bought the home.”

Another local resident, Lloyd Barrell, told councillors of his concerns that bringing the higher density developments to the area could result in more crime, especially if the units were rented out by university students.

“If it goes ahead, I think it’s going to cause more problems for the police.”

Astrid Clos, a consultant for the developer, told councillors that the plan is not to market the units for rental by students.

The proposal is being put forward by a numbered company, 9428577 Canada Corp. A search of public records finds that the company is registered to Jane Chi-Yan Fung and Carmen Tat Wa Ng. The address on file for the company is a commercial plaza on Woodbine Avenue in Markham.

Fung’s name is the only one attached to the development application submitted to the City of Guelph.

Along with the townhouses themselves and the related zoning changes, staff have also recommended the approval of several bylaw amendments for the property, including permitting a smaller side yard (three metres, down from 4.65 m) and a larger maximum building coverage (52 per cent, up from 40 per cent).

The Dec. 10 council planning meeting is scheduled to start at 6:30 p.m. at city hall.