Last month was the busiest August for home sales ever

Canada’s housing market continued its improbable run in August, as average prices jumped by almost 20 per cent from where they were a year earlier, and the number of homes sold shattered the monthly record.

The Canadian Real Estate Association, which represents more than 130,000 Realtors across the country, said Tuesday that 58,645 homes were sold during the month, which is 33 per cent more than changed hands in the same month last year. It’s also more than six per cent more than the number of homes that sold in July, which was itself a record for the month.

August is typically not a very busy month for home sales. Normally, the market starts off the year slowly in the cold winter months before spiking in the spring, cooling down through the summer and getting ice cold again toward the end of the year. Then the cycle begins anew in January.

But 2020 has thrown those seasonal trends out the window as lockdowns in March and April delayed a lot of home purchases and pushed the buying season until later in the year.

Even with a global pandemic that at last count had wiped out more than a million jobs from Canada’s labour market, last month was the sixth-busiest month on record for home sales, and the busiest August ever. 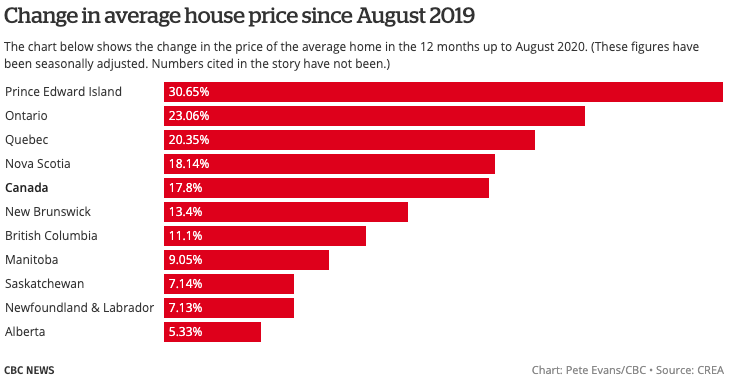 Prices skyrocketed, too. The average price of a Canadian home that sold last month was $586,000. That’s up 18.5 per cent from the same month last year.

CREA says the average price can be misleading because big sales in expensive markets like Toronto and Vancouver can skew the number.

Because of the outsized influence of those big, expensive markets on the national average, CREA calculates another figure, known as the House Price Index, which the group says is a better gauge of the market because it adjusts for the volume and type of housing across markets.

“It has been a record-setting summer in many housing markets across Canada, as realtors and their clients play catch up following the loss of so much of the 2020 spring market,” CREA chair Costa Poulopoulos said in a news release.

“It really does seem that the spring market shifted into the summer.”

TD Bank economist Brian DePratto says the numbers suggest the market continues to “defy gravity” any way you slice them, but he wonders how long it can last.

“While the lack of spring market has been an important factor behind the unseasonably strong summer, as of August, the level of sales activity is now in line with historic norms, suggesting that much of this pent-up demand has been satisfied,” he said.

Despite sales plummeting to their lowest level in decades during those early months of lockdown, for 2020 as a whole so far 341,463 homes have changed owners through the first eight months of the year. That’s 0.8 per cent ahead of the sales pace this time last year.

“While Canadian housing markets have made a habit of mocking them in the past, the fundamentals augur for at least a partial retrenchment of sales activity over the remainder of the year.”

Diana Petramala, a professor at the Centre for Urban Research and Land Development Ryerson University in Toronto, says COVID-19 has sped up some of the trends that were underway in real estate before the pandemic hit.

Namely, that people want more space, which leads them to either have to pay more in big cities, or move away to get it.

“Millennials are aging and moving up the income ladder and as you make more money, you want bigger and better housing,” she said in an interview.

Some of the highest price gains are in suburban markets just outside major cities, where prices have risen by more than 25 per cent in some places near Toronto and Vancouver. That contrasts with the condominium market, which is noticeably softer in both markets.

“Immigration has been replacing millennials in cities but those resident populations are moving out of the cities,” she said. “This is happening not just in Canada.”

She said booming August sales are in large part happening now because they didn’t happen earlier in the year, but “some of the price gains are maybe running ahead of themselves.”