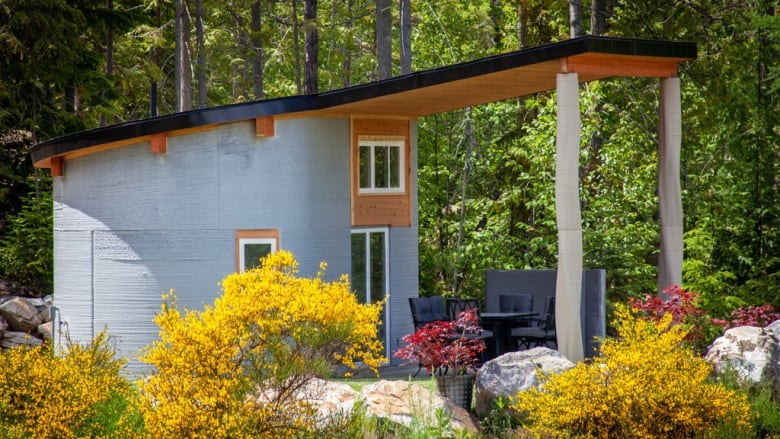 Robots, software speed up construction while making it precise, repeatable

The Fibonacci House in Proctor, B.C., boasts spectacular views of the nearby mountains — but that’s not what makes the tiny home a one-of-a-kind vacation rental.

It is Canada’s first 3D printed house — a spiral structure with a standout feature: Curved walls. (It was inspired by — and named after — the mathematical Fibonacci sequence.)

Also known as additive manufacturing, 3D printing is a process where an object is built using layers of materials as directed by a digital design.

While 3D-printed construction is still considered to be in its infancy, advocates say that in the future, the technology could be used to build houses with unique designs quickly and more cheaply, with less of a need for scarce skilled labour.

Ian Comishin is the president of Twente Additive Manufacturing, the company behind the Fibonacci House, which is listed on Airbnb. He said 3D printing allows builders to construct complex, curved walls for the same price as a straight wall.

“So now, architectural features that are exciting or adding aesthetics can be done for virtually no cost comparison,” he said.

To construct such a home, the building is first designed digitally. Designers determine which aspects of the house can be 3D printed; typically, it’s parts like foundations and walls made of concrete — a material that lends itself well to 3D printing. The instructions are then sent to a robotic printer, which can either build the elements at the construction site or elsewhere, like in a factory.

The walls of the Fibonacci House were printed off-site in 11 days, then brought to the build location for workers to assemble. “The robot itself has a hose and a nozzle,” Comishin said.

A mortar-concrete mix is pumped out of the hose, and it’s formulated so each layer can be stacked on the next, building up the structure layer by layer. It’s much like a baker’s nozzle piping icing onto a cake.

There’s a cottage industry of people who use much smaller 3D printers at home, making and sometimes selling various knick-knacks. Some libraries and maker spaces also offer members access to 3D printers at their facilities.

But the real promise of the technology is how it will change the creation of bigger products, from planes to buildings.

A solution for homelessness?

Don McQuaid is the managing director of World Housing, an international agency focused on solving homelessness, which helped fund a 3D-printed community of 50 homes in Tabasco, Mexico.

“Our belief is that technology is going to be the solution for homelessness, and we believe that everyone deserves a home,” he said.

Now the non-profit is partnering with Trente Additive Manufacturing on an ambitious project here in Canada. Called Sakura Place, it will be a community of five 3D-printed homes in Nelson, B.C., for families struggling to afford housing. Each house will be 700 square feet with two bedrooms, a kitchen and a bathroom.

The community could one day be a proof of concept for using 3D-printing technology to build affordable housing elsewhere in Canada, as many continue to voice frustration with the country’s expensive real estate market.

In September, the average home price in Canada was $604,000, up more than 17 per cent from one year earlier. And according to a report by Scotiabank, Canada has the lowest supply of housing per 1,000 residents among the G7 countries.

3D printing could also address some of the challenges posed by the short building season in some of Canada’s remote communities, McQuaid said.

“It could be a solution for us to be able to come in, fly the [3D-printing] machine and use local materials and local people to assist and build in a tight window,” he said.

How it cuts costs — but not that dramatically

Comishin also sees the technology addressing a shortage of skilled labour in the construction industry.

“This type of technology is something that’s very easily adapted to somebody who … comes from just about any sort of computer background,” he said. “It allows for job sites to have access to precision and repeatability that is sometimes unachievable just through human processes.”

That predictability can reduce costs, he said, before cautioning that although 3D-printed homes are cheaper than traditional builds, it’s a reduced cost — not a fraction of the cost.

Many parts of the house, including windows, toilets and fixtures, can’t be 3D printed, Comshin said.

“The cost on those things don’t change,” he said. “So from that perspective, we can still do affordable housing, but there’s pretty unrealistic expectations [around] what this technology can do from a cost perspective.”

A number of studies and projects have estimated cost savings to range from 10 to 50 per cent, compared to conventional construction.

Another challenge is that while a 3D printer can build concrete structures relatively cheaply, that doesn’t include the cost of the 3D printer itself, which can range from $49,000 for the small, basic models, to upwards of $125,000 for the larger models, according to 3Drific, an internet publication focused on 3D printing.

Still, at least one jurisdiction is aiming to sharply ramp up 3D construction. Dubai in the United Arab Emirates is aiming to have 30 per cent of new construction in the city-state be 3D printed by 2030.